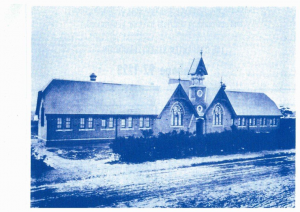 Prior to 1872, there were three Common Schools in the Brighton district. These were church schools with a total enrolment of 500 pupils. As government grants to Common Schools would cease from 1872, it became an urgent matter for the government of the day to provide school accommodation for the rapidly increasing numbers of children.

Boards of Advice were elected and consulted the Education Department about local needs. It was decided that a school in the Brighton district was urgently required, as temporary accommodation was difficult to obtain. Land on the corner of Wilson and Male Streets, Brighton was purchased from Mr Walstab for 450 pounds and a new school was subsequently built.

Architects: Terry and Oakden designed the school to be built in brick, have a bell tower above the front door, gothic window arches in the two classrooms flanking the entrance and pairs of windows on the front and back of the two long ‘school’ rooms which ran the entire length of the building. 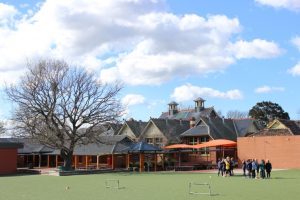 There were also two long schoolrooms situated at right angles to the front entrance with gothic windows on the schoolyard side.